Malaria is a short film that depicts the downfall of an ordinary hard-working US citizen, who loses his job, is bitten by a mosquito, and descends into a fever and sickness. While being ignored by those surrounding him and finding himself in the darkest of places, this citizen’s journey ultimately leads to him with no other option than to live in the streets – houseless.

It is a metaphor showing how quickly and unexpectedly, one small event can be catastrophic.

“As filmmakers, we learned a lot from making this film, so we decided to create a campaign – #houselessnothomeless. With this campaign, we aim to dig into the collective consciousness and bring awareness to the homeless crisis in Los Angeles, currently one of the most pressing issues in the City.”

To learn more and get involved, please visit https://www.houselessnothomeless.info/

BEHIND THE SCENES – DIRECTOR’S STORY ABOUT THE CREATION

A couple of years ago I was editing my short film “Veneno” in Indonesia. It was a great sunny day, my wife Julija and I were on our way to the shop, and all of a sudden I started feeling dizzy, weak and having mini blackouts. Once we got back to our apartment I was all covered in sweat and barely walking. That night I experienced the most extreme fever in my life, dengue fever.

The next few days all I could think of was, how a small insect could turn your life upside down in a second. The symbol of a tiny mosquito carrying a deadly virus turned into a fixed idea. I knew I had to build a story around that concept.

A couple of years later, my wife and I moved to LA. Since the place itself is quite pricey I decided to buy myself a bicycle to save some money on gas and parking, along with it being better for the environment. I had a meeting scheduled in the Arts District, it was my first time cycling through massive shiny skyscrapers in Downtown LA.

After a couple of blocks, the scenery started changing, people were lying on the ground, screaming, talking to themselves as it turned out later I was passing through Skid Row.

Don’t get me wrong I have been in LA several times before and I was aware of the homelessness epidemic in the US but there is a massive difference in being isolated in the comfort of your car, and actually biking on the streets in LA through Skid Row.

I had a strong feeling that I needed to write a story about this subject, so I started researching and came across a youtube channel dedicated to homelessness issues in the US called “Invisible People”. The key message in all of the homeless people’s interviews was that a minor problem snowballed them into living rough. I figured that the mosquito bite would be a perfect metaphor.

The last thing some people want to do after a hard day at work is to watch a preaching short film about homeless issues. My trick was to write the story entertainingly from the beginning and shocking at the end. This way the viewer would have the same unexpected impact as I had while cycling through Downtown LA. 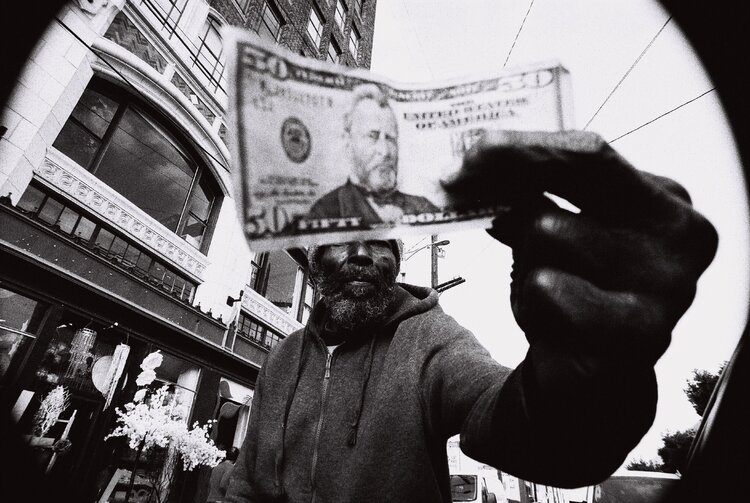 A couple of weeks after I had written the script and treatment, I received an email from a German based producer Niko Kreis from Bonaparte films. We jumped on a call with Niko and instantly connected, he mentioned that he is looking for a character-based script and that’s exactly what I had. After a couple of weeks, Bonaparte films send me an email that they like the story and want to produce it. Without thinking twice I connected them with executive producers from Paranoia Production and we started prepping the film.

We had three shooting days, 4 rolls of film, and a tiny crew. Since we were shooting on film we had a really tight and ambitious schedule. Kelsey, our leading actor and I decided to do a couple of rehearsals to talk about the character and test scenes out.

LA is a fascinating place once it comes down to locations, you can find almost anything there but the downside is the cost of acquiring a location which can be sky high. Without tons of support from the location owners and rental houses I don’t think we would be able to achieve the look we were aiming for. Overall the shooting days went great, the crew and cast were supportive and stood strong shooting sunrise to sunset.

We spend a full three days shooting 35mm photography all across Downtown LA. The most intense moments for sure happened on Skid Row. People can react really aggressively once they see cameras. I don’t really blame them since Skid Row has become a local attraction for the intrusive groups of tourists.

Being out on the Skid Row was quite scary & intimidating from the beginning. It was only the two of us Tony the DP on the project and I, we both were carrying cameras and tried to hide them. People would start screaming, pointing fingers and threatening you straight away once they see cameras. Social workers and police would stop you and make you aware that it’s a life-threatening risk, taking pictures in this area as people carry weapons such as knives and guns.

After our first session, I realised that if both of us would continue walking around taking pictures we would get into some serious trouble. I decided that I would go talk to people and ask permission to take a picture, and Tony would photograph them. For our own safety it was the best call and it would prevent us from getting in any life threatening situations.

Honestly, you never know what kind of reaction you would get from a homeless person, some people were brutally rude, some kind, and supportive. When speaking with them, people would get the idea that we are there to help not to entertain ourselves, they open up and tell me their personal stories of how they ended up living on the streets, even invite us in their tents to show us how they live.

I had to fly out of LA for another project, but deep down I sensed that we needed to pick up a couple of shots in the desert to make things easier in the edit. I am really thankful to Tony and Kelsey that they supported the idea. With our producer’s help, Tony gathered everything that was required for the pick-up day.

For the pick-up day, I was already in Moscow. The time difference & jet lag actually helped, I had a lot of time before the shoot to prep references and make a shooting plan for Kelsey and Tony. The Harper dry lake is a massive location, with no actual roads on the map. It was quite intense to navigate our crew car to the exact place we needed. The mobile phone signal was really low, and I was afraid that the guys would get lost and we would lose the sun. I never directed remote over a phone, I can’t say that I liked it. I usually like to exchange energy with my actors and crew. Still we got a lot of great footage.

Later on in the edit, we used a lot of the pick-up material, which once again proved that you can’t give up on your instincts and senses.

The key element of the story is the mosquito itself. From the start, I wanted to go for a faux prop mosquito. As it turned out there is only one company in LA that provides insect miniatures for film, that was closed at the time we were prepping and shooting the project. All of our team was desperately looking for mosquitoes right up to the last shooting day, we even considered finding a real one, but it was not the season. After we wrapped the last shooting day my wife Julija and I got into the car and believe it or not there was a real mosquito flying in it. I guess that was a good sign.